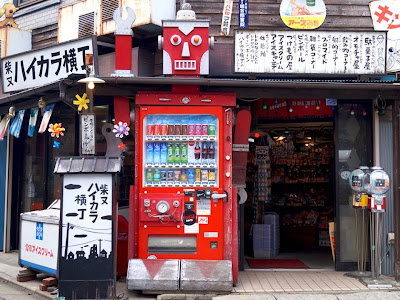 As my readers may know, I rarely use a picture which is not my own as a "random picture", but this comes courtesy of Coca-Cola Japan. No, this is not a "funky vending machine", but rather an ingeniously modified machine placed in front of a shop in Shibamata, Tokyo. I don't know if this was inspired in any way by the fact that Shibamata is located in Katsushika, a place which hosts the home of the headquarters of toy manufacturer Tomy.

Though much of this modification is done above and beside the machine, some of it is in front and, in theory, could impede access to the machine because of the way the blocky "feet" stick out. I couldn't help but wonder if such a modification in the U.S. might cause some consternation and a demand to return it to its former state. I thought it was cool that Coca-cola Japan displayed this picture rather than became angry about the way in which their machine had been altered.
Posted by Orchid64 at 8:00 AM