During the last eight months of my time in Japan, I taught a sweet old lady who used to bring me gifts on a regular basis. She told me that her favorite sweet was dorayaki. This was a woman who, when I told her that I was leaving Japan, started to cry and continued to do so throughout most of the remainder of the lesson. I learned from that experience to tell my students about my departure at the end of the lesson.

Because this woman was so emotional about my leaving and so sweet to me, I always associate this particular Japanese treat with her. I was her favorite teacher - when I told her that I'm sure she'd find another very nice teacher when I was gone, but she said, "but, I love you!" - and this was her favorite snack. I have to say, given how hard my departure was for her, I feel a little guilty every time I see dorayaki. It's not a happy association, but it is a reminder that teachers are not just monkeys who entertain in English to the Japanese people who they associate with. That's just who we are to other foreigners who have no respect for us.

I realize that's a bit of a downer to start a post off with, but they can't all be about mascots with large crotch plates or delirious yet non-drug inspired stories about other mascots. No, no. Sometimes, this is serious business despite the sugar- and salt-drenched nature of my work here.

For those who don't recall from my other single review of dorayaki, these are pancake-like cakes with red bean paste in the middle. Mine promised to be studded with lavish and large bits of chestnut as well. All of this was available at the sale price of $2.99 (about 300 yen), which is about as cheap as dorayaki ever gets around here. Usually, these go for $5-6 a pack in my area.

One of the reasons that I haven't reviewed dorayaki much in the past is that I have a lack of love for the type of cake on the exterior. It tends to be dry and sticky. It's supposed to be modeled on or similar to castella, which I am not a big fan of. This particular version does have the tacky exterior of castella, but it's not as dry inside. In fact, the cake portion was fluffier than usual and that made it much more enjoyable. 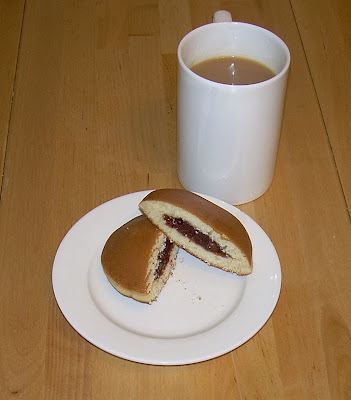 The filling though, was not quite as promised. I realize that this is a smallish picture for detail, but there is not an enormous collection of chestnut pieces in there. The illustration may show them in there like nuggets in a gold miner's pan, but they are pretty thoroughly integrated in the real deal. That doesn't mean this was bad. The red bean jam filling is actually quite tasty. It doesn't have as many large, un-mashed beans as these sometimes do, but it is slightly coarse in texture. I've had better anko, but this is absolutely not bad anko. The sweetness balance between the somewhat bland exterior and sweet interior is quite good. I also enjoyed the textural contrast between the cake and filling.

This is not the best dorayaki to ever come down the pike, but it was certainly very tasty and brought a nice sense of nostalgia as well as an enjoyable tea time. If you're a fan of red bean sweets and have never tried these, this is a good and relatively economical place to start. If you like this, then you can move up the scale to something handmade from a Japanese sweets shop (if you have access to one). I'd certainly have these again.

Growing up as a child I LOVED dorayaki. I blame it on the sneaky product placement endorsed by the popular Japanese cartoon "Doramon". Nowadays I can't stomach too many of those because they taste way too sweet.

They still bring back pleasant childhood memories, however.