As is so often the case when I buy a product that I can't read the label on, I failed to look at the English on this until I got home. For the record, this is a Korean snack that is made by Lotte, not a Japanese one. That being said, it's very similar to the Japanese product called "Harvest Biscuits".

At first, I thought that this was the Korean version of that product, but I looked back and found that they are made by Tohato. They're also covered in sugar in Japan, so it's clearly a different deal. I did research Lotte's web site to see if they make such a cracker for the Japanese market, but, if they do, it's not on the site and I don't recall eating one in Japan.

I do remember trying the Tohato sesame Harvest Biscuits in Japan and being relatively unimpressed. The problem was that, though they were labeled "sesame", I recall that coconut was the dominant flavor and the sugar sprinkled on the top tended to hurt my teeth. They were okay, but just didn't "work" on the whole. I think they were really just too one-note.

I bought these at a Korean market for a few reasons. One was that I was suckered in by the cute illustration of the amiable farmer with his scythe and the little grain graphic that is part of the product name (which, obviously, I could not read as it's in Korean). I'm a fan of whole grain flavors and their earthiness. I see white flour as a palate onto which other flavors can be spread and whole grain flour as bringing its own taste to the mix. Some people don't like that, but I do.

Had I known these were called "Harvest Crackers", I probably wouldn't have bought them as I would have confused them with the Japanese ones I had already tried. Of course, the other reason I bought them was that they were only 50 cents (about 49 yen). It's not much of a risk. 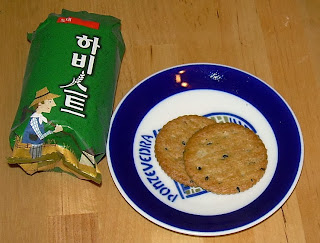 The crackers are very thin and immensely satisfying in their crunch. I don't think you could device a nicer textural experience. The flavor is complex for such a cheap and readily available treat. It incorporates coconut and a solid, nutty hit of cinnamon along with the right amount of salt. There is a hint of sweetness as well as some savory mixed in. The complexity is achieved through using an impressive list on ingredients including coconut powder, almond powder, roasted soy bean powder, and black soybean paste. The artificial flavorings include "milk" and "coconut".

I'm not saying that this cracker is going to set your soul on fire, especially if you don't like coconut or sesame. However, it is a very enjoyable and light tea time treat which has a lot of taste, excellent texture, and a modest calorie profile at 12.5 calories per rather large cracker. This is something off the beaten path and if your tastes run toward Chips Ahoy and Oreos, this is going to be an enormous letdown. If your tastes run more toward rice crackers and ancient grains, then you may find this to your liking as well.