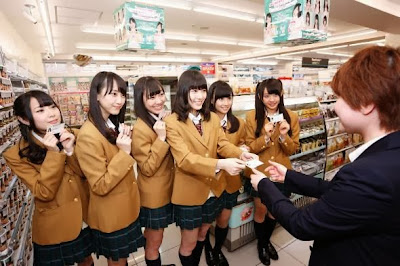 The truth is that I didn't know what SKE48 was until I stumbled across this news. I could guess based on the existence of AKB48, that it was a group of girls who were being presented as "idols". They're part of the obvious factory-production line of cute girls that are rotated in and out of these groups to appeal to the new breed of Japanese male. You know, the herbivorous type (soshoku danshi) that doesn't date or have sex with real people.

This campaign will include various Family Mart sweets that include chilled desserts and baked goods. There is also a chance to win prizes including what is talked of as a "toy". Given the type of person who is attracted to these groups, I'm wondering exactly what sort of "toy" is involved and whether it requires a bicycle pump to inflate or a battery to assist it in its functionality.

Note that I tend to focus on specific snack news rather than something more general like this, but I loved this picture because it shows the typical proper exchange of business cards in Japan. It's a good capturing of a moment which I relate to well.
Posted by Orchid64 at 8:00 AM

Pardon me for asking this here despite it being irrelevant to the post, but I don't know where else to send you my question, I have a friend who just recently came back from Japan who went there for the semestral break (We are still in university you see) and she gave me this long cornsnack that resembled a tube sort of, the package was completely in japanese so I can't read what it's called, would you happen to know what this is?

Hi, Camille. These are called "bo" or sticks. I've reviewed several of them in the past. One is here:

If they have cartoons on the packages, then they're probably the yaokin variety:

I hope that is helpful!

Oh! this is it exactly! (yaokin)the wrapper is covered in cartoons, a gray cat and an octopus who are both sporting boxing gloves to be more specific)I suppose this is tako flavored. Thank you very much!