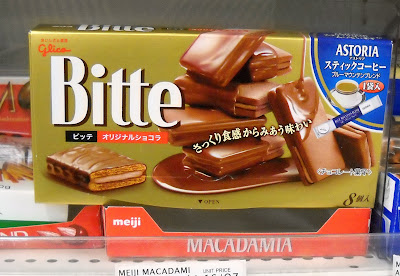 I found this box of cookies at one of the Japanese markets that I frequent and was immediately struck by the similarity in appearance between this and an Aussie favorite. This product is, apparently, not new and was recently refreshed in some way (package design, most likely). There was only one box at the market and it was pretty obscenely priced at something like $5-$6 for a smallish quantity. I've had TimTams, which these at least superficially resemble, and I wasn't willing to shell out so much money just to see if what looks like a duck also quacks like one.

There are two flavors of this out at present according to Glico's Bitte web site - chocolate and rum raisin. The latter sounds pretty gross actually. If any of my readers have tried this and are familiar with TimTams, I would be curious to know if they are similar of if they just look alike.

Incidentally, you get a free Astoria-brand instance coffee "stick" packet with this. I guess they want you to have the chance to enjoy this with their instant coffee. That didn't really sweeten the deal for me in considering this purchase.
Posted by Orchid64 at 8:00 AM

lol "aubergine" and "eggplant"
Your writing is very humorous and witty
Keep it up :)

You made the right call on this one. Loving Tim Tams, I was excited to see a box of Bitte at work but the chocolate flavour is pretty uninspiring.

Thanks, Maggie! I'm glad I didn't waste my money!