I've been reading a book about the nature of good and evil, and, no, I'm not going to talk about how food is "good" or "bad" based on its nutritional content because we all know that isn't going to have a happy ending on this blog. The book talks about a large number of studies conducted on babies in order to determine if we are born with our sense of morality or if we learn it. The jury will be forever out, but early results indicate we are not born as tabula rasa (blank slates), but come with some basic sensibilities or inclinations.

The reason I mention this book is that the studies are discussed in terms of how valid what they are measuring is based on how the study is designed. For example, to see if babies like "good" or "bad" things, an animation using colored shapes (red square, blue triangle, yellow circle) was used in which on shape either helped or hindered another while it traveled up a hill. The writer labors to let the reader know that the colors and shapes were varied in order to be certain that the babies didn't like a certain color or shape, but rather liked the shape that pushed the other up a hill and disliked the one that blocked it.

How you look at something matters as much, if not more, than what something actually is. Truth is not nearly as objective as people believe it is because there is always a perspective that may be as valid as what you see as an absolute fact. The people who designed the original experiments probably just thought shapes were enough to take away any bias on the part of babies while allowing for discriminating features, but then others came along and said they saw the baby's preferences differently. The experiments had to be refined to eliminate all possible interpretations other than the one which said babies like helping things more than harming things.

The interesting thing about studies like this and analyses is that how something is conceptualized is highly variable. In Japan, I often had this difficulty with students who tried to translate concepts from their language to ours. Some of my students called sembei a "cracker" and some called it a "cookie". Since sembei are both sweet and savory, hard and dense, and light and airy, it is difficult to say any particular translation is correct. The Japanese conceptualize sembei as these crispy things made of rice and don't need to break them down into sub-categories. However, Western folks don't tend to see "crackers" as something sweet and I wonder if it is impossible for someone to be given a frosted sembei and think it was some bizarre Japanese "cookie" rather than a "cracker". 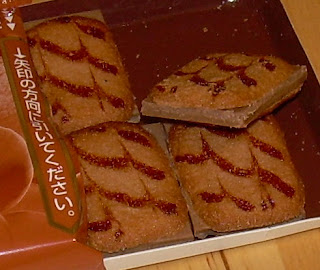 The reason this thought came to mind was that I was looking for today's item on Bourbon's web site so that I could get more information about it. It turned out that locating it was quite a byzantine task. Is it a cookie? Is it chocolate? Is it candy? Each is a thin, delicately crispy plank with a large amount of chestnut chocolate filling between. The box calls it a "blanchul", which sounds French, but I couldn't find anything that explained what that might be. In fact, searches just turned up more varieties of "blanchul" that are sold by Bourbon.

At any rate, I don't know how Bourbon sees these, but I checked "biscuits", "chocolate", "small box biscuits", "chocolate snack", and "snacks" (long shot as this is usually a catch-all for salty things) and I could not locate the damn things. What is it that Bourbon sees these as? Well, it turns out that they see them as a limited edition release that came out at the end of August that no longer warrants addition on their web site... so much for perspectives on the truth and other lofty thoughts that don't belong in a snack blog anyway.

Getting to the business at hand, which does belong on a snack blog, these are excellent cookies. They are sweet, crispy, and have a taste which is reminiscent of caramel and coffee. The "coffee" aspect comes from the roasting of the chestnuts. The caramel probably has to do with warmed sugar and butter aspects. It doens't taste strongly of chestnut, but tastes quite good nonetheless. The box says that 10% is chestnut, which really isn't an enormous amount, but it all works nonetheless.

I loved these and felt that they were a perfect fusion of cookie and candy. They may be on the sweet side for some, but, to me, that just encourages portion control. Each cookie is only 22 calories and packs enough of a punch that you aren't going to want to gobble a bunch down at once. I don't know how much longer these will be on the market, though chestnut is an autumn/winter flavor so I'd wager they have another month or two. I found them at Nijiya for $2.19 (about 225 yen). In Japan, they're 130 yen ($1.34). They were well worth what I paid for them and I'd buy them again.

Hi. Need to ask for your favour. Do they use animal fat or vegetable fat in this Blanchul snacks? Would appreciate it greatly if you could email them because I can't speak Japanese. I hope you can help me. Thanks!