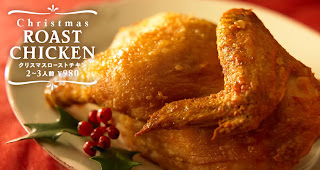 When you think Christmas dinner, you think of chain pizza places, right? Well, you would if you were in Japan - at least you would as a second thought after you found out that your local KFC no longer had any open slots for Christmas dinner meal reservations. They're the second line of defense in a country which doesn't give anyone the day off for holiday meal preparation. You'd look to fast food, too, if you had to try and pull a "special" meal together after a long day on the job. Domino's is offering the tasty-looking specimen above. It looks big and juicy, doesn't it? Well, if you view it in context, it's not so much a half "chicken" as a "half pigeon". 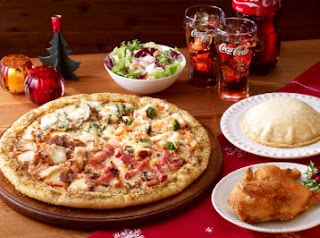 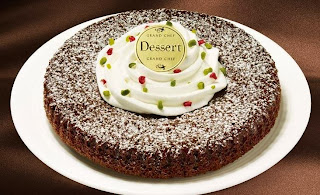 I checked out the last, and most popular, of the triumvarate of pizza chains in Japan. That would be Pizza-la, and, apparently, they want nothing to do with this Christmas nonsense and don't appear to be making any special offers. I guess they do well enough with their regular Japan-style offerings as well as things like their New Zealand pizza (cheddar cheese, cheddar sauce, chicken, mayonnaise, thick-cut bacon, onion, tomato, and parsley).

Of course, the "grandaddy" Christmas deal in Japan is KFC. They are offering their standard Christmas deal for 3,980 yen/$38 (pictured above) and it includes a medium-size commemorative plate. Note that this plate design, is very similar to the 2010 design on the one my husband and I got during our one and only KFC holiday celebration. It's a little different (people around a tree instead of around a merry-go-round), but similar enough that I confused them on first glance.

Happy Christmas Eve to my readers. This is actually my favorite day as the moment of anticipation is always better than the moment of any sort of reveal. I hope you all have a good one!
Posted by Orchid64 at 8:00 AM