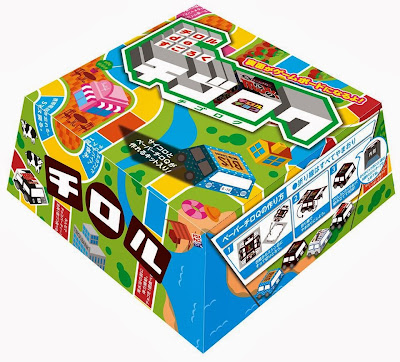 All images are from Tirol.

The press on the box of Tirol candy pictured above mentions that it's two weeks until Christmas so you can play this game and enjoy your candy at the same time. While it's not specifically stated, I wonder if the idea is that you can have some holiday fun by playing this game during holiday parties. In Japan, silly little games, like bingo, are not uncommon during the party season at this time of year.

The box itself becomes your game board and you are supposed to use the candy wrappers as part of the pieces (you can see them showing a little car-like illustration with a candy wrapper placed around it). The candy itself isn't really much of an issue. It contains a lot of the standard Tirol flavor types and varieties that are included in most mixes ("Bis", "Milk", etc.). 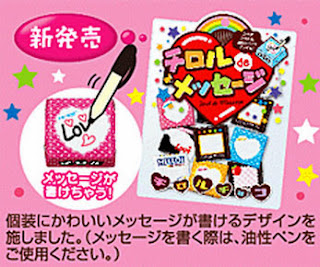 Besides making a box that can be used as a game, Tirol is going down the path of KitKats and releasing "message" chocolate. Trying to write much of anything on their small packages would seem to be not too dissimilar from trying to create your own candy hearts on Valentine's day. Still, you have to give them credit for trying, or at least for trying to rip off a concept that a more successful candy maker has been using.
Posted by Orchid64 at 8:00 AM