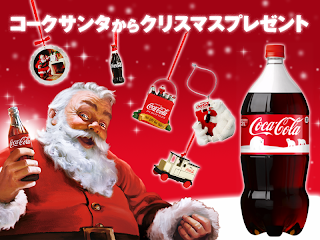 I've mentioned on my other blog that there was a time in Japan when I was laid up with terrible back pain. The remedy according to the doctor I saw was to stay in bed and get up as infrequently as possible for up to three months. He insisted that I was risking a permanent crippling if I did otherwise.

After two months of this and not getting any better, I took matters into my own hands and started walking little by little every day. One of the things that I did was walk to the local Inageya market and buy 1.5-liter bottles of Diet Coke. The time when I concluded that "enough was enough" was near Christmas and there was a promotion going on in which they gave away adorable little ornaments with the famous Coca-Cola polar bears on them with the purchase of such sizes.

I could only carry two bottles at a time because of my back, but walking there everyday and trying to slowly acquire every single type of ornament provided with early motivation to keep conducting my personally prescribed "physical therapy". My back got better, and I had a full collection of the nifty ornaments.

Unfotunately, I didn't bring them back with me when I left Japan, but Coke is putting out a new set for those who'd like to start their own collection. These aren't nearly as cute as the ones I got (they were all polar bear themed), but they're still worth collecting. They're one of the more useful little freebies that you can get with a snack or drink. I'd also encourage people to give Coke some business because I have to give the company at least a little credit for pulling me through a very difficult time.
Posted by Orchid64 at 8:00 AM