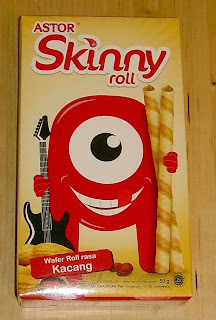 I wonder if naming your product "skinny" improves sales because it leads consumers to believe that you will lose weight by eating it. In the case of these snacks, which are only 19 calories per roll, there's not much chance that you'll get skinny unless you exercise the most judicious of portion control.

Note the one-eyed mascot on the cover. His physique is not only quite rounded, but he also seems to have gained a Miley-Cyrus-like tongue control issue. I guess it must be some sort of issue that musicians suffer from. Too much music or singing must cause some sort of tongue muscle flabbiness tha results in unpleasant lolling on occasion.

This snack comes from Indonesia and is made by a company called Astor and distributed by Mayora Inc. In addition to these snacks, they also distribute the ever present Kopiko coffee candies. They also have some very spiffy-looking wafer snakcs called "Zuperr Keju" and "Beng-Beng". With such awesome names, how can they go wrong?

When I received these "Skinny Roll" snacks as part of a package of goodies from KS Snacks, I expected something similar to "Pepero". That's the Korean pretzel roll snack that is like an inside out Pocky stick which left me less than impressed. It turns out that I was very wrong about what I was getting and in the best possible way.

For starters, the sticks are not pretzels. They are wafer rolls similar to Pirouhette cookies. They are delicate and crispy. Though they don't add much to the flavor except for the mildest of sugar-cookie-style flavor, the filling happily does all of the heavy lifting in that regard. Though it looks a lot like a hollow tube, it's actually lined with a sweet, peanut-cream-like filling that carries just the right level of sweetness without being cloying and enough peanut power to leave you happy without being heavy or overbearing.

This is, by far, one of the best "finds" I've had since returning to America. It's damn tasty with an excellent texture. KS Snacks is offering them on their web site and I strongly recommend that anyone who is a peanut fan give them a try.