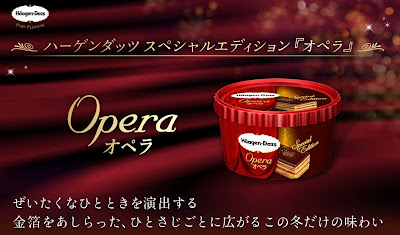 Quite a few years back, I read a few blogs written by women who took part in something called the "Daring Baker's Challenge". I don't know if it still goes on because a web search yields about a billion hits, but I'm pretty sure that it is still going on. I don't know who runs it or who decides what the most recent "dare" is, but someone has to be in charge of setting up difficult tasks for people to accomplish.

One of the earliest challenges for these "daring" sorts was opera cake. I didn't know what it was, but I could see that it was immensely complex with multiple layers of cake, ganache, chocolate, coffee, and almond. It was enough to make me decide that I didn't want to take any dares in my kitchen.

This ice cream doesn't exactly come up to the challenge either. It incorporates all of the flavors of opera cake, but it has little of the complexity. It's largely a butter cream ice cream with a thin layer of almond dough ice cream topped with a layer of chocolate sauce and a few sprinkles of gold leaf on top. The flavors are pretty interesting even if it doesn't have the sophistication of the layers of cake. I was just hoping that there would be actual bits of cake in the ice cream, but that isn't a common variation in Japan. They're not quite that decadent.
Posted by Orchid64 at 8:00 AM