Back in 2009, when returning to America was more of a vague plan than a reality, I decided that I'd do comparison reviews of all of the plain milk chocolate bars produced by major Japanese food conglomerates. This mean Meiji, Lotte, and Morinaga. Lotte's Ghana won and Meiji came in last.

None of them were "bad", but mostly Meiji's had more of the bitter coffee-like aftertaste that is so commonly experienced with Japanese chocolate. I will note that most chocolate in Japan has this note because it has a somewhat bittersweet or semisweet quality. This would be fine if it didn't taste like Meiji's offering was bittersweet chocolate with a bigger dousing of sugar to tamp down the bitterness. It's as if someone hasn't figured out how to mellow out those notes without oversweetening.

I checked out Meiji's page for its current chocolate line up after sampling this "Black" chocolate bar. I noted that the wrapping designs have gone all san serif and lost all of their old-fashioned charm. I figured that "Black" meant it would be dark chocolate. After tasting it, however, it seems more like a description of the color of the wrapper. It tasted very much like the milk chocolate version that I tasted before.

There's plenty of sweetness. Perhaps the bitterness scale was about a 6 and the regular bar a 4 on a scale of 1-10, but it would almost certainly gravely disappoint ardent fans of dark chocolate. The site claims that it has a "sharp sense of cacao" and is "full-bodied". It doesn't have much in the way of sharpness, but it is a little deeper in it flavor profile, but it is just a bit too sweet to really feel well-rounded. 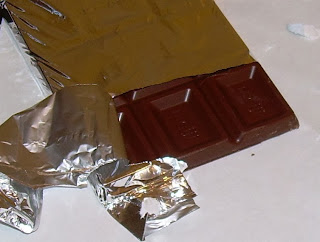 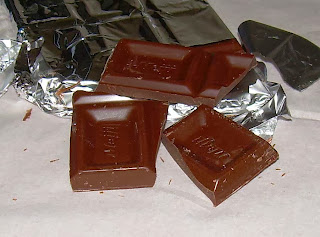 If you look at my picture, the bar (black is shown on top) doesn't even look all that much darker than its milk chocolate brother. The basic recipes seem to be so close as to not really make one distinguishable from the other. The calorie values are also nearly identical with the dark one coming in at 22 calories per square and milk being 24.

The main drawback to me of any plain Japanese chocolate, and some other types is that it's always soft and lacking in snap. Usually, you can taste and enjoy chocolate better at room temperature, but this softness always makes me want to put it in the refrigerator and have it cold. Placing a cool square in my mouth and allowing it to slowly melt is the best way to enjoy these, but I think I'm much more sensitive to chocolate having a "snap" and firmness than most people.

This is a good chocolate bar, but it's not great. I'd sooner have a Ritter Sport dark chocolate bar if I was looking to go to the dark side as I think they tend to be deeper in their chocolate flavor and hit the stronger bitter notes without the added sweetness. I certainly don't regret having this, especially since I only paid 99 cents for it as all Meiji bars were on sale at Nijiya market for that price. It was a good opportunity to try something pretty basic and common in Japan without paying the high import costs as I paid the same for it here as I did there.

If you want to buy this, well, the usual suspects (online sellers) don't tend to carry it because it is pretty basic. The truth is that you'd have to be a candy expert to want to spend the extra dough on these as those who do carry it (largely on eBay) are charging $4-5 for something which is usually sold for 100 yen (about a buck) in Japan.

If you sorta-kinda like dark chocolate but generally find it too intense, this is your baby and if you can pick it up for a lowish price, I'd say it's worth a try. I like it, but I wouldn't necessarily seek it out again, particularly when I have so many other options which I like even more.

For those who are interested in some Japanese papercraft, there is a page dedicated to downloads on Meiji's "candy land" site. It includes boxes, "flags" to put on your cupcakes (print and attach to a toothpick), coloring pages for kids, and a paper tree. The page is here for the time being (I expect the contents will change after Christmas).

Interesting review. While I recognize that your tastes may simply differ from mine, I must say that this is some of the best dark chocolate I've found. The bar I bought was indeed full-bodied and has a tiny bitter kick, that subtle edge that sets off the other layers of flavor so beautifully. This is, true, a milder dark than some others out there. But it's also silkier and richer than a lot of dark chocolate, probably due to the whole milk, and the overall effect is scrumptious. Definitely worth a try. This dark chocolate lover is very happy.