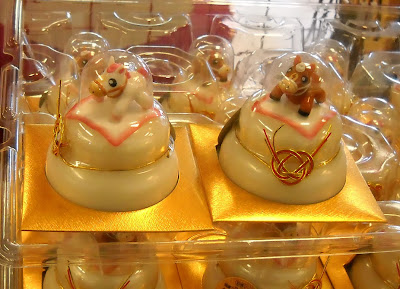 One thing which I was much slower to learn about compared to when I lived in Japan was what "year" it would be next year. I found out that it was going to be the year of the horse by seeing these tiny mounds of mochi with plastic horses on top of them at a local Japanese market. Had I still been in Japan, I'm guessing I would have seen these thing at least a month ago.

These mochi balls are shelf-stable and designed for decoration more than consumption. I bought one of these a few years before I left Japan because it had an adorable little plastic tiger on top of it. I had it for about a month and then decided to pop it open and sample the mochi. I didn't expect it to be like freshly-made mochi. What I expected was something akin to the dried stuff that you buy in bags in supermarkets. It was far "worse" than that shelf-stable mochi. It was so tough, even with heat and moisture added in, that I felt it was inedible.

While I may have gotten a bad batch, my guess is that these are "mochi" only in name and that these are really meant only as decoration. I'm guessing Japanese people already know this and wouldn't even attempt to eat them when the holiday is over - much as we might view fruitcake. ;-)
Posted by Orchid64 at 8:00 AM

i bought one of these on new year's eve of 2014. i decided to cut half of it and cook in the microwave. it sort of "puffed up" while being cooked. then became very soft and chewy. the taste was very bland, though. then i stored the uncooked half on a plastic container. it developed molds after 2 days.T_T maybe i should have used it as decoration instead.x)