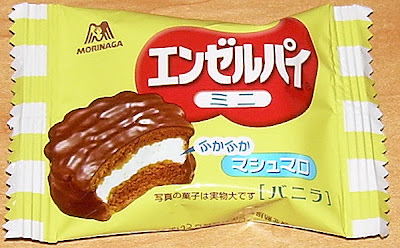 Angel pies are something that I've seen around Japan for a long time. In fact, I think I may have purchased a box of them a very long time ago. The full size pies are about 6.5 cm or 2.5 inches in diameter. The mini ones are about 3.5 cm or 1.4 inches. The big ones are usually sold in boxes of 6 in supermarkets. I picked up this tiny one at an AM/PM convenience store for 30 yen. It was a premium price for such a small morsel, but I wouldn't be reviewing it now if I had had to buy a whole box of the big ones as my lack of a strong impression upon initial purchase years ago probably indicated I was less than overwhelmed. Also, at 40 calories, it's an indulgence that I can make without much guilt. 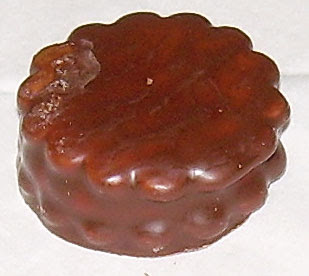 The angel pie is a fake chocolate coating over a super soft graham-cracker-style cake and a soft marshmallow filling. The softness of the pie when chewing is emphasized as a positive attribute in Morinaga's blurb on these. It doesn't smell like much at all. There's a faint whiff of cheap chocolate. The first sense you have when you bite into it is of the graham cracker-style cake. It's a weak flavor, but it's the most prominent of all of the weak flavors. You are hit, for mere seconds, by a mild chocolate flavor and finally with an odd aftertaste which I believe is supposed to be the taste of the marshmallow filling.

This was a very "blah" experience. It wasn't bad at all, but it just wasn't very good. The funky marshmallow flavoring is off-putting, but the truth is that all Japanese-made marshmallows have a strange aftertaste, so it's par for the course. The main problem is that the textures don't have enough variation and the flavors are all too weak. It's inoffensive, but I wouldn't buy it again or even eat one if I was offered one for free unless I was very, very hungry because I wouldn't feel it was worth the cost in calories.

I think choco pies are better though! :-)

I like the creamy filling in them better than the marshmallow in the angel pie.