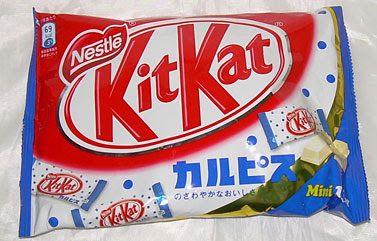 This is a party which I am arriving very late at for various reasons. The primary one is that this particular mini, which is a collaboration between drink maker Calpis and Nestlé Japan, was available in limited stores (Family Mart was the only place I saw it on offer), it was only available as part of a 13-unit bag, and it was too expensive. Usually, I can get bags of mini bars for 199-250 yen ($2.27-$2.85) and I only saw this for 278 yen ($3.17). And I try to avoid buying a lot of something which is an unknown and of dubious taste value. Let's face it. This is the sort of thing which one could easily find oneself disliking.

Essentially, I was waiting for just the right opportunity to buy this, and one did not come along for quite some time. I don't know if this was one of the very few "under-produced" KitKat flavors or if it just sold so incredibly well that no leftovers made their way to the bargain shops, but I didn't find a discounted one for a few months. Most Japanese KitKat specialty flavors hit the bargain bins in a month or so and seem to sit there for quite awhile.

A new discount snack shop opened on the other side of my neighborhood, and one hot evening I chanced upon it. Bags of these bars were sitting nonchalantly in a cardboard box outside the shop for 199 yen ($2.27) each. The shop owner was very keen to be of service and as I wandered around his empty shop, he tried to foist samples of very familiar bubbly sembei on me. I declined, twice. Though I do like that sembei, I wasn't hungry. The shop also had free cold green tea on offer. I'll have to revisit them soon and see if their solicitous behavior is ongoing or just an opening gesture from a new shop.

Getting back to these KitKats, which are actually less interesting than the service I got at the shop, I didn't quite know what to expect from them considering that I've only had Calpis in its non-original state a few times. Frankly, I was hoping it'd have more of a yogurt flavor than it did. There is definitely a bit of a "soda" flavor going on. I think the powder between the wafers must be made with ramune (Japanese lemon-lime soda) flavor. The filling reminded me of blue "soda" flavored fizzy candies I used to have as a child. I wondered if Nestlé Japan recycled part of the ingredients or formula for the ramune bar it released last summer. 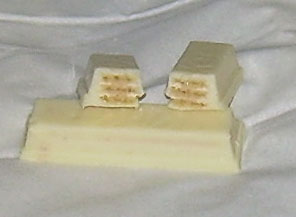 The outside coating had a little bit of a yogurt flavor, but was so much sweeter than it was sour that it just seemed like a relatively generic white chocolate with the vaguest hint of something else. Frankly, the chocolate was quite similar to the Calpis I sampled awhile back; it was like greatly watered down yogurt mixed with slightly tart lemon-lime.

This is a decent candy bar, but nothing to write home about. I'll either slowly eat the rest of the bag when my sweet tooth beckons me or slowly give away the rest of it. I can't say "don't buy this", but I also wouldn't say "go out of your way to buy this." It's interesting, but ultimately not all that incredible. This was clearly a corporate match that was done for the marketing value rather than the potential for a winning combination of flavors.