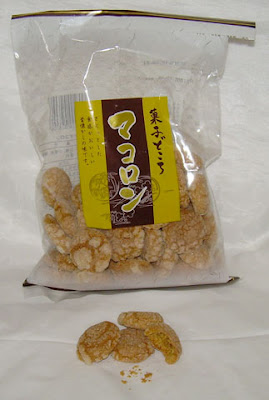 One of the interesting things about living in Tokyo is that every shop seems to open up new food vistas. I have 4 major supermarkets (Seiyu, Inageya, Peacock, Queen's Isetan), 2 green grocers (Takano and Yutakaraya) and a multitude of convenience stores and 99 yen shops (no fewer than a dozen) in walking distance of my home. You'd think these would cover all of the bases, but, no, there are still products that I never see unless I got far and wide.
My husband and I grabbed a bus to Don Quixote, a quasi-megastore with more junk than I've seen in one place since leaving the U.S. They had a lot of imports as well as Japanese items that I'd never seen before. I found a tasty 7-cheese frozen pizza there which I wish I could get nearby and the macarons that I'm reviewing today. I bought the macarons on a whim because I wanted to compare them to real French macarons, which are presently all the rage in Japan. I paid 198 yen ($2.20) for a 220 gram (7.8
oz.) bag.
These are produced by a company called Marui Suzuki, and I was surprised that they had a web site since the bland packaging on the cookies is often an indication that a small company with no image or web presence is behind them. Truth be known, my expectations of these cookies was so low that I didn't expect to bother to review them at all (hence the reason the picture is of an open bag). The company makes, distributes or markets a vast number of Japanese snacks from chocolates to youkan to manju to cakes and cookies. There aren't too many pies that they don't have their fingers stuck in. Their selection is so vast that I couldn't find a page for this product in particular, but it doesn't really matter since there is minimal product information on the site anyway. 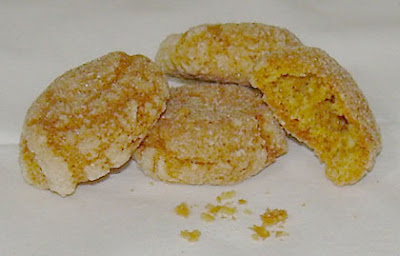 It turns out that the Japanese means to say "macaroon" rather than "macaron", and that turned out to be okay. This is a failure of the ability to translate foreign sounds directly into Japanese written language. These cookies are like Italian amaretti. That is, they are crispy, sweet, light little cookies with a base consisting of egg whites, nuts, and sugar. The first ingredient is peanuts followed by sugar, flour, and eggs. There is also a generic listing of "flavoring", but I'm guessing that may be something like vanilla. What these taste like is peanut butter.
I adored these because I love both amaretti and peanut butter. The texture is a delight and I wouldn't hesitate to recommend these to someone who likes crispy, meringue-like cookies. I only wish that calorie information were provided so I'd know how much trouble I'm getting into when I eat these tiny (about the circumference of a quarter or hundred-yen coin) cookies.

I've never been to Don Quixote, although there is one about 20 minutes away from where I live. I didn't know they sold food - I thought it was just clothing! These sound really delicious, must look out for some!

Hi, anchan, and thank you for taking the time to comment!

They really are excellent. I wish Don Quixote were closer to my home so I could tempt myself with these more often! Peanut butter sweets are so rare here, and these were a refreshing surprise. :-)