You'd think that M & M's would be the type of thing that'd go over well in Japan. They're small and clean to eat. After all, they melt in your mouth, not in your hand. For reasons I can only (and will) speculate about, you don't see many varieties of M & & M's in Japanese shops. For years, you could buy plain or peanut and that was pretty much it. After quite some time, a crispy variety showed up, but it really didn't taste greatly different from the plain ones. It just had a different texture.

Getting back to why I think M & M's haven't exploded with the same popularity of something like a KitKat (despite having a relatively appealing anthropomorphic mascot), I think it's about packaging in large part. Most people are not going to eat the whole bag at once and folding it up and trying to keep it around for awhile isn't very appealing to the Japanese, who are rather spoiled when it comes to convenient packaging. This is a country which is accustomed to conveniently resealable plastic candy tubes and individually wrapped portions. In large part, I think marketing has a lot to do with the lack of M & M's widespread availability (which must reflect a lack of general popularity). Well, there's that and the fact that there is a cheaper version made by Meiji called "Marble Choco". 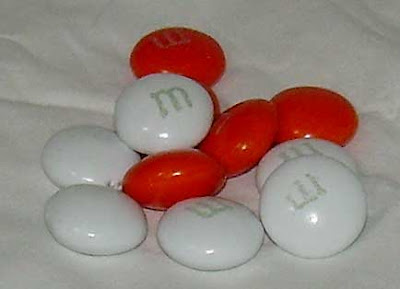 My husband picked these up at New Days convenience store for about 100 yen ($1.09), but you can buy them at just about any convenience store for the time being. There's not much to say about their appearance as most people know what a standard M & M looks like. These are only different in that they're only white and orange in color. They also smell a bit like orange baby aspirin. The taste was almost exactly like an orange Tootsie Roll. If you've never had one, it's an artificial orange mixed with weak chocolate. "Artificial" orange, which is more about citric acid zing than the fragrant loveliness of real orange, is what you taste when you eat a cheap, kid's lollipop.

These weren't awful, and I've read that they have been sold in other countries and some people are tremendous fans of them, but I just wasn't keen on them. I love orange and chocolate mixed in sweets, but this just wasn't firing on either of those taste fronts. The textural elements of the crispy candy shell and chocolate center were there, but the taste was just disappointing.

Who doesn't plan on finishing a small package on M&Ms in 1 sitting? ~Weird.

I had these in early June thanks to the gift shop at a friend's hotel. Like you, my reaction was one of indifference...and I was also surprised that they aren't in the US. As you mentioned, Japan doesn't have the variety of M&Ms that the US has, so why are the orange ones only here?

Nicholas: The Japanese often eat very small portions of sweets. I've seen people drink 1/5 of a 16 oz. bottle of Coke and put the rest in the refrigerator, or eat one tiny cookie. This is how they stay so thin! ;-)

Meredith: I think they have them in Australia as well. It is puzzling that they don't have them in the U.S. Maybe they test marketed them and everyone reacted to them as we have!

Thanks to both of you for reading and taking the time to comment!

I'd still be willing to try these! :)

Most of the M&Ms I find here are actually from Australia. Maybe orange was a flavor released there.

Hmm I'll have to look for these at the 7-11. I love chocolate and I love orange! Thanks for all the great reviews. You are helping me choose what to try while I'm here in Japan.