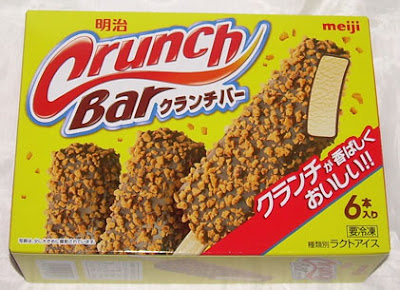 I'm not an impulsive shopper. Despite the fact that I buy snacks for review on a regular basis, I rarely just snap up something that catches my fancy. Usually, I'll scope out the situation and think about the items that catch my eye. I'll return later and buy the things I'm serious about. I should note that this is something that has occurred as a result of my snack review blogging. I was far less cautious before I'd eaten half of the available snacks on the shelves in Tokyo (not literally).

Usually, this somewhat careful approach serves me well. I don't have a lot of partially eaten boxes around the apartment save the items that it takes me a long time to eat. On rare occasions though, I have one of those "you snooze, you lose" experiences and this Meiji Crunch Bar ice milk was very nearly one of them. When I first saw it, I was inclined to buy it but wanted to wait until later. This was in part due to my caution, but in larger part it was due to the fact that my freezer was so full that I couldn't squeeze a single tortilla into it, let alone a box of 6 ice milk bars.

When I returned a few days later to buy these, the entire stock was gone. The card was still in the freezer, so I kept checking back and they finally returned. These bars are either quite popular, quite good, or have some novel value I hadn't been aware. For a moment, I knew what it was like to be Japanese and want something more simply because it appeared that everyone else wanted it (hence the reason people are waiting in line for hours to try whatever food fad of the month is going on). 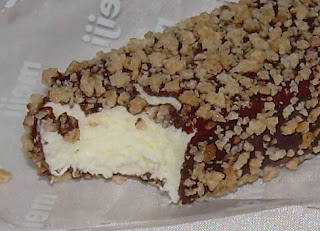 Obviously, the bars were put back in stock and I got my hands on a box. I picked this up at Inageya supermarket for 198 yen ($2.09) for a box of 6 small bars. Each bar is about half the size of a conventional ice cream bar in the U.S. (55 ml./1.9 oz.). and has 119 calories. The size is quite good for a satisfactory frozen snack with good portion control.

The bar smells a little like chocolate, but more than that it has the scent of the coating which is a little like cookies (it's flour-based) without the sugary sweetness. The bar itself is rather sweet, but not overbearing. The ice cream doesn't taste like much of anything except powdered milk (which is one of the ingredients), but it has a nice creamy texture when you let the bar sit for a few minutes before eating it. The chocolate coating is fine, but is a weak flavor component because it's not that thick. Mainly, you get a sense of sweetness and the crunchy bits on the outside.

As I ate this, I was strongly reminded of "ice cream day" when I was in junior high school. About one a week or so, kids could buy ice cream for a quarter to 50 cents (yes, I'm that old) and this smelled, felt, and tasted like the bars we used to buy. Of course, I grew up poor and rarely bought ice cream on ice cream day, but it's the type of sense memory that is all the more potent because the experience was rare and special.

This is by no means a premium frozen confection experience, but it's also a nice one nonetheless. I'd place this above average for a domestically produced ice milk bar that is reasonably priced. I enjoyed this quite a lot, but mainly because of the crunchy and sweet and creamy texture balance. If you require some solid flavor from your vanilla ice cream and chocolate coating, then stick with the Haagen Daas bars and their 400 yen ($4.23) price tag. If you want to live a little of your misspent youthful calories, then I'd recommend giving this a chance. I liked it, and I'd definitely buy it again provided it doesn't keep selling out.

Note: This is also sold as a single, larger bar in convenience stores, but I haven't seen it around any of my local shops.

This bar looks a little like a Captain Crunch bar, which was always my favorite as a kid. I've had them since and they can't live up to the memory.