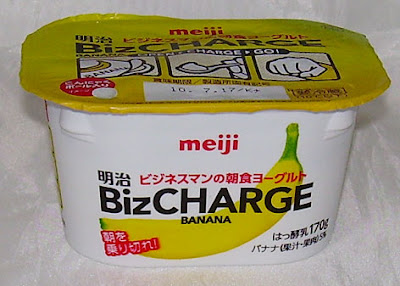 Have you ever asked yourself whether or not there is a yogurt out there that is masculine enough for you? It seems that Meiji has pondered this question as well and has determined that existing products lack the Y-chromosome appeal they need. 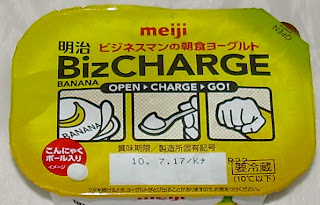 The reason this is called "BizCharge" is that it is marketed as yogurt for businessmen. Yes, this isn't your typical sissy food for little girls trying to watch their weight. It's a man's yogurt. The top tells you exactly how to use this product (Open->Charge->Go), in case you don't know how to peel the foil off the top of a cup of yogurt and consume it. I guess those businessmen aren't as well educated as they used to be, or that they lack the energy to think before consuming this yogurt.

Part of the promotion for this mentions that you get 86 calories of the total 137 calories in this from banana, though only 5% is banana. The idea is that men can power themselves up on that banana fuel. The ingredients list includes coconut oil, banana sugar, Stevia, and banana juice. The portion size is rather bigger than usual, 170 grams (6 oz.). I'm guessing the bigger size is due to the fact that this is for men to energize themselves on, and the calories aren't higher than they are because konnyaku has no calories to speak of. 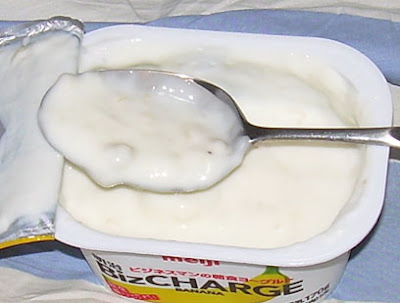 The yogurt smells nice and banana-like and has a lumpy texture. The lumps are both bits of banana and little chewy balls of tapioca-like konnyaku. The yogurt isn't as sour as most and not as sweet as some others. It's got a good, authentic banana flavor and has excellent fruit, yogurt, and sweetness balance.

I found this at Seiyu supermarket for about 120 yen ($1.37). I haven't seen it in other markets or convenience stores, but I'll be honest and say that I rarely pay exquisite attention to the yogurt sections as I always buy cheap, plain low-fat yogurt or Luna vanilla yogurt. This caught my eye because of the name. Banana yogurt also isn't very common, but this was really good. I'd definitely recommend any yogurt fans sample it, whether they are businessmen or not.

Nice post you got there. I'm a big fan of yogurt. but i have a question. Are these made just for men only? If yes,surely i would recommend it my friends(boys).

Hi, and thanks for commenting, siti. I can't tell you if it is for men only, but I can say that no one tried to stop me from buying it and I'm female and ate it...I haven't sprouted a beard or other man parts, so I think it's safe for all genders. ;-)

I found these at my local 711. No one stopped me from buying them either since I lack man parts. ;) They are delicious! Definitely recommend them!

Hi, Robyn, and thanks for sharing your impression! Just thinking about this makes me want to go buy another...and 7-11 is a lot closer to me than Seiyu!

I love banana yogurt and it annoys me how difficult it is to find.

Hahaha...I love that part. I'm not sure I've seen banana yogurt before in the US but then again I'm not a big yogurt fan.

OMG! I just saw this same yogurt posted on another blogger's webpage and I said to myself that when I visit next year I'd definitely look for them in a conbini! I'm so glad they turned out yummy...:)

Haha, I must say that this is one bizarro yogurt! I love how it says that it's the breakfast-yogurt for businessmen.

I've also noticed that Japanese yogurt products taste really, really good. The banana + konnyaku combo is odd but interesting. Thanks for the review!

Banana yogurt is the best! >u< If I'm ever in Japan I'm definitely trying this! ♥