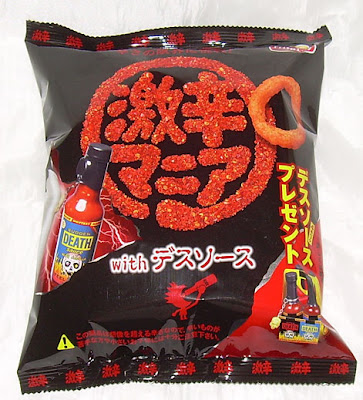 If someone did as that little guy did and really downed a bottle of sauce, I think he really would die.
Recently one of my students and I were discussing curry. In Japan, curry can be ordered with different grades of heat from 1 to 10. She said that she chooses a "3 and I told her that I go for an "8". I've actually had a "10" before, but the heat was so hot that I couldn't really taste the flavor of the curry after awhile. I offer this information to allow for the fact that I'm no chili wuss, though I'm also not the most advanced consumer of high powered chilis.

Nonetheless, when I saw this bag of Frito Lay "Extremely Spicy Mania with Death Sauce", I couldn't turn it down. I discovered it at Family Mart, and I have since lost the receipt, but I think it was about 160 yen ($1.82). I've never had death sauce, but anything that threatens my very existence with its heat draws me as a flame draws a moth. Also, this was a spin-off of the "Mayo Mania" snack I'd had before and there's something about the whole "mania" thing which is hard to pass up. Insanity and snacks just seem like a match made in heaven. 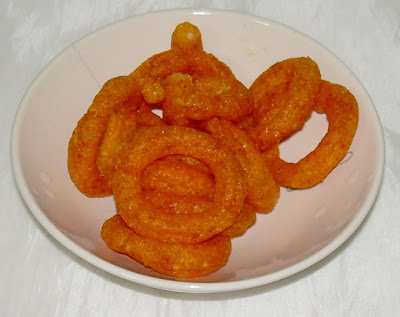 For those who don't know, "Death Sauce" is an American product which is made by a company called "Blair's" (which is ran by a man named Blair, imagine that). I've never had the actual sauce, but how deadly can it really be? Their marketing claims that they make the hottest sauces in the world and are in the Guinness Book of World Records. Ironically, their slogan for their "death sauces" is "feel alive". I was undaunted by their claims, and measured out half of the 60 gram (about 2 oz.) bag for consumption. I put them in a bowl and it left little bits of red oily residue on the dish where the rings touched the ceramic.

These are nice crispy, light corn-based snack rings. They smell a bit funky though. It's hard to pin down the scent, but the ingredients list includes "beef extract" and I believe that was what I was getting. You can also get a hint of the garlic and paprika used in them as well as, of course, the habanero.

The first bite was hot and savory. I could pick up some of the spices and they were pleasantly salty. The heat is quite strong and I drank some water. I ate about half of them, and the cumulative effect of the peppers on my tongue got to reach the point of "too much." It was painful, but generally in a good way. The whole point of super hot foods is to feel the burn and to release some endorphins. That being said, I stopped at about half the portion I had served myself because I knew it was going to get worse and also I couldn't really taste much past that point.

In the end, I didn't have to get something cold and creamy to sooth my tongue, but I wanted to and was glad that I had a frozen banana in the freezer to make into a smoothie. I was doubly glad because my stomach burned. In fact, it burned for about an hour after I ate a half ounce of these despite the fact that I had eaten grapes before these rings and a frozen banana smoothie with ice and low fat milk after them.

I don't know if these can actually burn your stomach with their ferocity, but I wasn't keen on the long-term nature of that warm feeling in my gut. Since people have been known to drink the sauce straight (for reasons I'm not sure of but it may go back to the whole "insanity" and snacks thing I mentioned earlier), I'm hoping that no real damage can be done. I'm also... concerned... about how this is all going to feel when it makes the journey through my digestive system. I've eaten Tyrant Habanero snacks before (in greater quantities) and experienced less stomach burn and residual warmth.

I liked these in terms of the texture, taste and the heat, and I have to credit them with giving me an incentive to exercise strict portion control. The whole bag is 310 calories and I think I could only manage a quarter at once, and even then that felt like more than necessary. These are tasty and should make fans of very hot foods quite happy. I think these types of things are the ultimate "otsumami" (food to be consumed with alcohol) in Japan because anyone who eats them will likely want to guzzle down beverages to deal with the fire in their mouth and stomach.

Though I'm not absolutely certain that I'd buy these again, I really did like them and I think I'll eat this bag very slowly - maybe two or three rings at a time and always with food. Mainly, my reservations only relate to the stomach burn. Note that there is a warning about the possible discomfort you can experience from eating too many at once and a recommendation not too many at the bottom of the bag so approach them with caution. This was made with Blair's "Sudden Death" sauce which seems to be the hottest in their index. After eating these, I concluded that I'm probably a chili wuss after all, but I'm still going to (at least) finish the bag, and I probably would buy more in the future if they remain on the market.

Where can I buy these??

Sorry, these were limited edition and aren't sold anymore.

Yeah I know. I was hoping I can still find them around... :(
I love these!