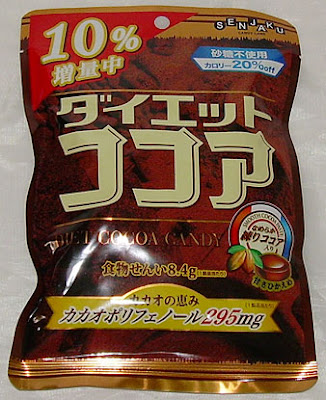 Back when I was working in a Japanese company, one of the office ladies used to keep a box of cocoa in the kitchen. It was in a brown box with gold writing in katakana (the phonetic alphabet for foreign words) which said "Cocoa". I never sampled that cocoa, as I wasn't a break room thief and I wasn't fond of chocolate milk. My coworkers, on the other hand, often stole my milk and mayonnaise when it suited them. That cocoa box design closely resembled the one on this package of hard candies, but it was made by Morinaga. I wonder if this is meant to bring to mind that cocoa powder which is made by a much better known company than Senjaku.

This is the first product I've reviewed by Senjaku. They make a limited, but not exceptionally narrow line of candies which mainly consists of hard candies, but there are also some gummies and pressed sugary powder candies. The company is relatively small with only 175 employees. The company makes a point of mentioning that 103 of them are women, but I'm not sure why that is relevant. In their "Diet" candy line, they have green tea, coffee, and this cocoa candy.

I found these at Seiyu supermarket for 168 yen ($1.80) for an 88 gram (3.1 oz.) bag. I looked long and hard before I bought them because "diet" often means very little in Japan. The bag says that there is a 20% calorie reduction for these candies compared to conventional types. There are 22 individually wrapped candies in the bag and each is 12.5 calories. Part of the promotional information for this states that it contains 295 mg. of Polyphenols. These are the antioxidants that are in things like coffee, wine and nuts. Of course, that number is for the entire bag.

One interesting thing about these is that they actually have their ingredients written in both Japanese and English. The first is hydrogenated glucose syrup, which I hadn't heard of before. Some research revealed that this is a modified starch which is used in sugar-free candies (and is similar to Maltitol). The second ingredient is corn syrup, which isn't surprising since I think that it's impossible to make hard candies without some sugar. Other ingredients are whey powder, cocoa powder, polydextrose, vegetable oil, cocoa paste, aspartame, and flavoring. 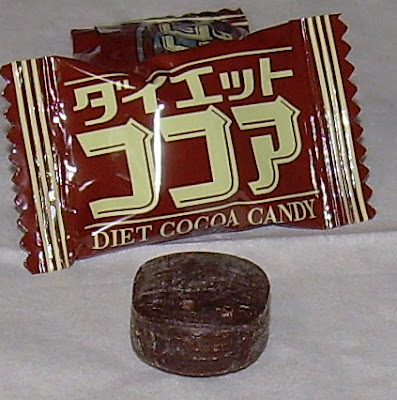 Unsurprisingly, these don't smell like much of anything, but a few moments on the tongue reveal a rich, deep cocoa flavor. The taste is amazingly deep and broad for a hard candy which has no milk products. It tastes like a cup of hot cocoa that is rich and chocolatey. My mouth was full for the duration with the loveliest flavor which carried just a hint of liqueur. I'm guessing the vegetable oil adds a real richness to the taste since the fat can likely be detected. Unlike many hard candies in Japan which are slick and super smooth, these have a bit of a rough texture to the candy. This in no way undermines the experience. In fact, I think it makes the sense of chocolate consumption more palpable.

These were incredible for a hard candy. After the first one, I wanted to run back to Seiyu and buy up their entire stock while they still had them available. It's so often the case that I find something I really like once and never see it again, particularly if it is made by a smaller manufacturer. If you like rich hot cocoa, and want something to give you the flavor of a cup of it without the calories (and the texture and fullness), by all means try these.

Wow, fantastic! I just hope that I can find some :-)

They're now in Okashi no Machioka snack shops for a lower price (147 yen) than Seiyu. I'm hoping their spread to another shop means they'll be here to stay!

Both my husband and I really enjoy them. Good luck finding some!

I'll look at the T&T but I probably wont be able to find them in Edmonton. They do sound delicious