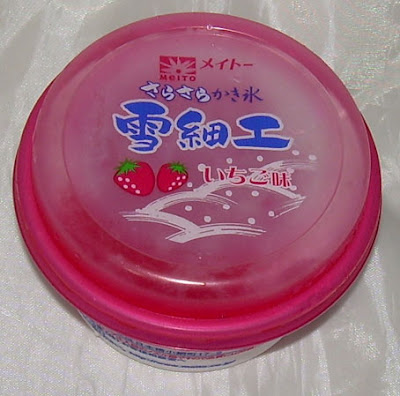 "Sarasara is a Japanese onomatopoeia which indicates the sound of water or sand moving smoothly (or it can also mean "squeaky clean"). In this case, I'm guessing it is used to indicate that the little ice granules will move smoothly over each other rather than stick together in icy clumps.
When the heat starts around May until it ceases somewhere in, oh, October, the number of frozen treats starts to swell. While mass market kakigori (shaved ice with syrup) cups are available year-round in select areas, the variety greatly increases during the hotter months. Fortunately for  makers of icy confections, it's hot for quite awhile in Tokyo. For someone like me who is sensitive to heat, no amount of ice cream, ice milk, or frozen anything makes enduring the weather worthwhile.

I decided that I really should review one of these low rent kakigori after having mentioned them in the Tirol polar bear chocolates review. You can see that the packaging for this cup of ice is similar to that of the Tirol candy. Also, these are a part of summer in Japan and one of the things no snack blog should avoid forever... no matter how hard one tries. I found this particular cup of shaved ice at Inageya supermarket for 98 yen ($1.12). This one is made by Meito, a food manufacturer (established in 1953) that sells milk and milk products in addition to being a distributor for Dole in Japan. There are 200 ml. of ice in it (approximately one cup) and it's only 49 calories. That should tell you something about the substance of it.

As you can see by the cup above, this is pretty much ice with some deep pink syrup squirted into it. From the vantage point above, it looks okay. At first, I tried to scoot the flavored ice and plain ice together to mix it up, but as I got down just a bit deeper, that became rather more difficult. 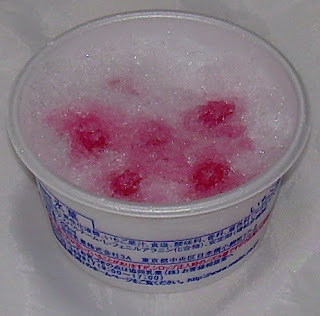 Yes, apparently 98 yen won't pay for much in the way of syrup; mostly, it's just ice. Where flavor was present, it was a mildly sweet, very odd concoction which bore little resemblance to strawberry. It wasn't bad, but it almost seems like false advertising to call it "strawberry". On the occasions when I've had kakigori during festivals, this is the typical type of syrup that you get so that part is authentic.

If you want to imitate the results of this, go to your local carnival or fair and buy the cheapest, lamest snow cone you can find. Cram it in a cup and stuff it in your freezer until most of the ice bits stick together. Make sure they skimp on the syrup! If there is flavor all the way to the bottom, it's no good. Toss it out and ask for a more sub-par one.

Obviously, this was very lame and I wouldn't buy one again, nor can I recommend anyone else buy this one. To be fair, there are definitely better versions than this one around, but they are all basically the same - plain old frozen water and fake syrup. I can't understand how these things continue to take up space in freezer cases. They really do appear to cater to those with pretty low expectations. For the same price, you can buy a "Super Cup" ice cream that is far tastier.