I think that onigiri (rice ball) is probably the number one snack in Japan, though it isn't glamorous enough to get talked about much and is close enough to real food that it's not seen as a "snack". Any time a Japanese person feels peckish, but doesn't feel like a meal, they tend to grab one of these at convenience stores. Onigiri is on offer at most "conbini" for 100 yen ($1.14), often in a familiar triangular presentation. They usually have a filling (seafood in most cases) or are mixed with other seasoning elements (fish flakes, beans, etc.), and nori (dry, paper-like seaweed) is separated from the rice so that it can be wrapped around the rice ball without absorbing the moisture. Onigiri is a handy snack which provides energy and enough substance for a full feeling.

Before I came to actually like plain Japanese rice, I liked onigiri and occasionally bought them at 7-11 when I worked at Nova language school so very long ago (19 years ago). My favorite has always been grilled ("yaki") onigiri, which is a rice ball that has been brushed with a soy-sauce-based seasoning and cooked until the exterior is brown and slightly crispy. When my friends and I went to our favorite yakitori joint, I'd always order yaki onigiri.

These days, I tend to just make my own plain white rice and haven't enjoyed a nice grilled rice ball for a long time. Part of the reason for this is that they're much more expensive than just making rice myself. That being said, I can't grill rice balls because I don't have the proper type of grill and I'm also frankly too lazy to mess about forming the balls and brushing them with sauce.

I needed something to eat with the remaining lemon basil chicken that I reviewed previously (yes, it took me many weeks to eat the rest of them) and I figured this pack of 3 grilled rice balls from Lawson's 100 yen shop would do the trick. I figured that if I were desperate enough to eat frozen chicken, I'd probably be happy to have something else that was frozen along with it as I generally resort to frozen food in moments of fatigue, illness, or dire hunger brought on by waiting too long to start preparing food. 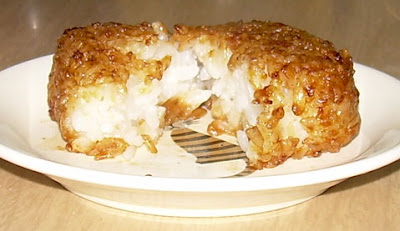 These rice balls are quite small. Each is about a half cup of rice pressed into a fairly firm ball. The instructions on the package offer different cooking times based on microwave wattage and how many rice balls you are cooking at once. I made only one because 93 calories of carbohydrate is enough for me for lunch. The outside of the onigiri is nicely brown with soy sauce and possibly is actually grilled. The inside is just plain rice. I put this in the microwave when it was frozen solid and one minute and ten seconds at 600 watts brought it out steaming hot.

The rice was tender, yet firm. The smell was actually very nice because of the seasoning. The soy sauce-based exterior was flavorful and had a good balance. The only thing that separated this from the yaki onigiri that I ordered at yakitori restaurants was the lack of a crispy outside. Still, I think it would be hard to make this the same as a freshly grilled rice ball, particularly when heating it in the microwave as crispness is usually the first thing you lose when freezing and irradiating food.

I liked this quite a lot and would definitely have it again if I was feeling lazy or simply wanted to keep something on hand in the freezer to have with a meal and I didn't have time to cook rice. If rice is fairly boring to you, this may float your boat because of the soy sauce flavoring. At 100 yen for 3 balls, it's also pretty reasonable economically.