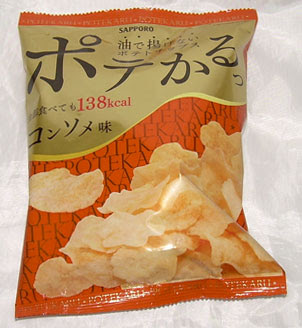 I've read that Japanese beer makers are targeting female customers more because they are a demographic which hasn't yet been thoroughly explored. Apparently, Japanese men are already so thoroughly on board with beer that there's really no point in pushing them any harder. I have to imagine that Sapporo, best known for its booze, created this otsumami (food meant to be enjoyed with drinks) for women to go along with getting them loaded without  getting too fat.

The advertising for these mentions that the potatoes are from Idaho and that the oil is 72% less than conventional chips. It also says that they are so light that you can eat the entire bag. Since the whole bag (33 grams/1.16 oz.) is only 138 calories, it certainly is light on the hips. The name is a combination of "pote" for "potato" and "karu" for "karui" which means "light" in Japanese. 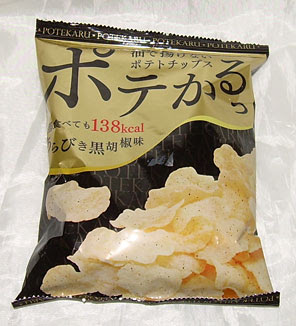 I tried two different kinds - black pepper and consomme. There is also a plain "salt" flavor. If you pick these up at a convenience store, they're about 160 yen ($1.84) a bag. I got one of mine for that price and the other on sale for 138 yen ($1.58) at a discount snack shop called "Okashi no Marche". At present, the consomme and salt versions are easy to find at most convenience stores (I got mine at 7-11), but the black pepper is less common. These are distributed as "limited editions" in metropolitan areas only. I don't know if this is test marketing or just another case of a product living a short life for the sake of novelty then disappearing. 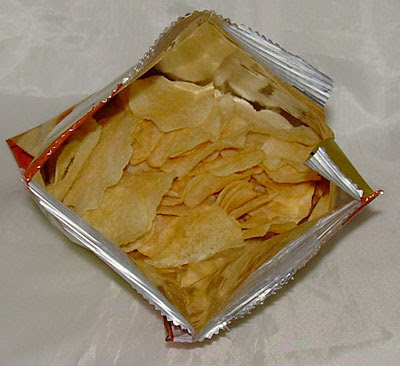 The chips themselves smell like potato. The flavoring on both the black pepper and consomme is on the light side. Because pepper is a stronger seasoning, I preferred them. The consomme, which has a light dusting of orangish powder, had almost no flavor besides the potato itself.

The chips are super thin and crispy. The texture is amazingly satisfying. The flavor is what you might expect from baked potato chips. It's heavy on potato and has zero oil flavor. I've had Lays brand baked chips before and I like these better. They carry less of the flavor of raw potato that you sometimes get with baked chips. 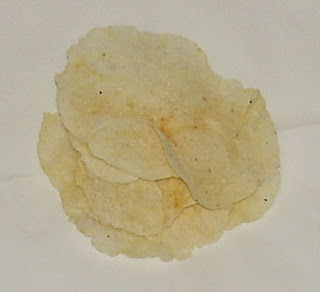 These are good and the calorie count is amazingly good for the quantity of chips. They aren't going to stack up to the experience of eating greasy, "real" fried chips, but they will gratify a desire for a crispy, salty potato-based snack. The lightness and the texture are excellent. If you like thin chips, these will definitely light your fire. If these weren't so expensive compared to other chips (which are closer to 100-130 yen for the same serving size), I'd eat them often. The price, however, makes them not quite such a great repeat buy. That being said, I've already had them twice, and if they stick around, I know I'll have them again.

Those look like really decent "light" chips! Glad they tasted good, too.

I'm going to look for these!

Let me know if they aren't available in your respective areas. Since the advertising markets these as only being in certain cities, it'd be interesting to know which ones they skipped.

I'm in the Los Angeles area, so the only way I would find these is if they are imported and sold at the various Japanese and other Asian markets in the greater L.A. area. :)

I haven't seen them yet, but it seems to take a while to get anything down here in Kyushu if we get them at all. I never saw the Aloe flavored Kit Kats anywhere here, so I had to have a friend send them.

I wish I can taste these should order it on amazon? lol ok maybe not

I've checked Amazon's lackluster assortment of Japanese snacks, and these aren't on the list, unfortunately. That being said, I think Pop Chips are better anyway as non-fried chip alternative. These are just better than Baked Lays.