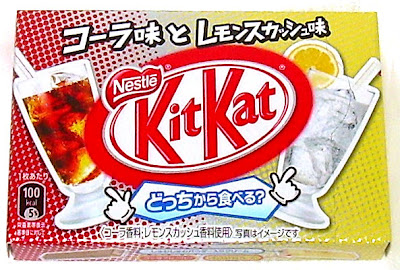 The concept for this KitKat is an interesting one, though not necessarily a good one. Instead of offering one dubious flavor as a limited edition weird flavor, they are offering two in the same box. Each box contains two fingers of lemon squash and two of cola. This probably helps Nestlé Japan sell to people who are interested in the more palatable of the two flavors and have no choice but to buy both. Of course, we all know which one is going to be lamer. 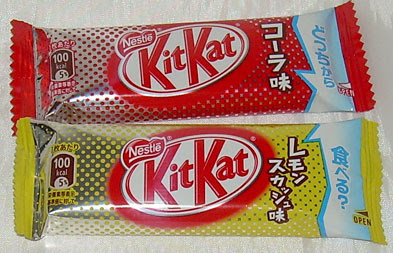 Does anyone like cola flavored candy? Seriously. Is it a flavor that works outside of carbonated liquids? When I was a kid and was trick-or-treating or got a lollipop and couldn't choose the flavor, cola was always a disappointment. Of course, the fact that a given flavor doesn't "work" never stopped Nestlé Japan before, so why hesitate now? 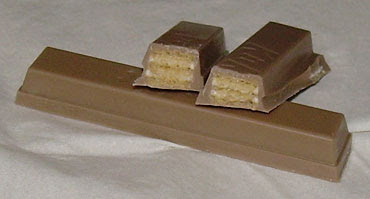 Okay, I shouldn't prejudge the flavor just because every other cola candy on the planet is a disappointment. And, I shouldn't judge it solely on the fact that it smells like every other cola candy I've ever had. I will judge it based on the fact that it tastde like flat, generic cola mixed with fizzy generic-tasting "soda" powder. It was okay, but nothing to write home about. 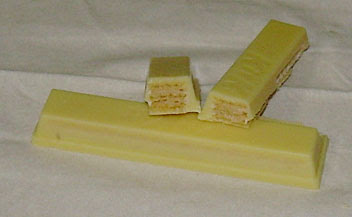 The lemon squash one held far more promise because lemon chocolates can be good. This smelled promising, which is to say, lemony. Also, the pairing of sour lemon with sweet white chocolate sounds like a good balance. In reality, this wasn't as good as the Valentine's day lemon KitKats that I've had before. It's not bad, mind you, but the lemon flavor is spoiled to some extent by the addition of a fizzy generic soda flavoring in the powder between the wafers. This flavor is similar to the one in the Caplis KitKats that I recently reviewed. I think they added something in to give it a slight alcohol flavoring that makes it slightly bitter.

Neither of these is great. Both are, at best, "interesting". If you are interested in trying something unique, then pick this up and give it a sampling. You won't hate them. You may like the lemon squash version and be indifferent to the cola. I got this at a 7-11 near one of my local stations for 120 yen ($1.37). If you can't find it though, it's not worth tracking down.

This one isn't even on my radar. I'll have to keep an eye out. I don't ever remember having cola candy as a kid, only root beer flavored things. Now I would love to try a root beer Kit Kat.

Oddly, it's also not on Nestlé Japan's web site (at least not when I checked). I don't think we'll ever see a root beer one because most Japanese people hate root beer. I've given it to students, as has my husband, and they think it's pretty vile. :-)

I haven't seen the Cola and Lemon Squash Kitkat yet. I'll keep an eye out for it, just to say I tried it!

And my hubby likes root beer! I trained him early on in our relationship. :-)

Maybe a Dr. Pepper Kitkat would go over better here?

Yep. Cola Candy = Bad Idea.
Except if it's the cola bottle gummy variety because the shape & color are just too cute.

These look cool. Its the first I have seen of them on the review sites. Nice work!!

Hi, Cindy, and Jim, and thank you for taking the time to comment!

Cindy: I've never seen the cola gummies before, but they do sound cute. :-)

Jim: I think this was part luck of the draw and part effort on my part to get the review done ASAP rather than let the KitKat sit in the refrigerator for awhile. I was lucky to find this so fast.

Actually I love cola candy. I love the gummies and I bought a bunch of cola candy when I was in Japan. I wish it were more readily available here.

I'd love a chance to try both the cola and ginger-ale Kit Kats. Those are two of my favorite flavors.

Cola toothpaste tastes weird, and I'd have the same feeling with cola flavored KitKats. Although root beer ice cream was pretty good... I wish these were in Taiwan.

Returned to Japan today after a week's visit home, and stopped into my local 7-11 to grab some dinner and tomorrow's breakfast. I spotted these as I waited to check out and grabbed a couple. Looking forward to sharing them with family!

Helen: Sorry for missing your comment and not responding! I would be curious to see what your husband thinks if you can find this!

Dennis: This might be the sort of thing importers will carry. I'd be surprised if the weird KitKats aren't carried by the mail order places that sell Japanese snacks. Good luck, and if you try it, please come back and leave a comment about your impressions!

Nicholas: Oh, dear. There's cola toothpaste? Ewwww! Root beer is great with ice cream (and is probably good as a flavor). I love root beer floats! Just thinking about it makes me want one, but there's no root beer here. :-(

Meredith: Welcome back! And I'll be curious to hear your impressions!