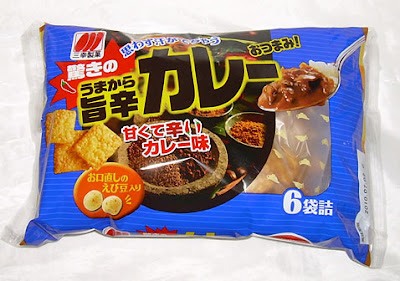 I'm coming up on two years of this sort of Japanese snack food reviewing and you'd think there would be some lessons I would have learned about having food lying around all of the time, especially in the 5-month long "summer" in Tokyo. If you don't finish up a salted snack food rapidly, it's going to go stale in the heat whether it is completely sealed up or not.

I left two of the six packets of sembei in the bag for about a month before I got around to them and they started to go stale despite being well-sealed both in their individual packets and a Ziploc bag to boot. Stupid heat! The fact that they sat around for about a month is an indication that these were not something I was crazy about or that I was really lazy about getting around to reviewing. In this case, it was mainly the latter as I've found far too many salty snack treats this past month and couldn't eat them all up.

If you look at the picture on the front of the bag, you'll see that it is not Indian-style curry but rather Japanese. Japanese curry is more like a spicy stew than actual curry. It's heavy on the beef or pork gravy and usually lacks some classic Indian spices (like cardamom) and includes some Japanese components (like soy sauce, though not always). Among the ingredients for this are apple juice, black pepper, soy sauce, pork and chicken extract, and chicken oil. 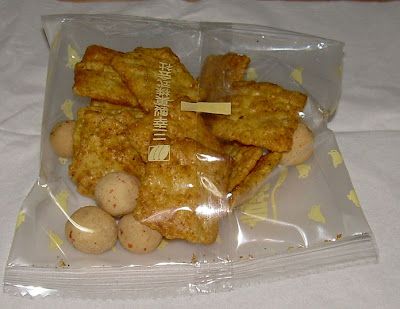 There are two parts to the sembei, a flat curry flavored cracker and a small ball which is shrimp flavored. If you eat them separately, the shrimp balls are quite sweet and the curry crackers rather savory. I recommend eating them both together for the best effect. They smelled nicely spicy, and carried a lot of the flavor of curry powder with some good cumulative black pepper heat. They have a lot of good savory flavors in them, but somehow seemed a bit flat in flavor regardless. I think part of the problem is that the peppery nature and curry powder flavors saturate your tongue too rapidly and mask any other tastes (like garlic).

These were good, and I think fans of rather mundane curry (as opposed to authentic Indian curry) would probably enjoy them. I liked them fine, but I wasn't over the moon about them (as their approaching staleness testified to). I found them at Okashi no Machioka snack shop for about 160 yen, and I certainly don't regret sampling them, but I would have been happier with about half as many packets as come in the pack (six, at 86 calories per pack). These have a nice sweet/spicy thing going on, but they just didn't blow me away.

hello... i like your post.... I'm wondering what it taste like... do you like Japanese's food so much..??
ha! same as me... you reminds me of chicken curry(Malaysian's style) that my mom made it for me as it was too spicy... and as for Japanese's curry, I never try it before but someday, maybe i will.... thanks for the info about the curry....