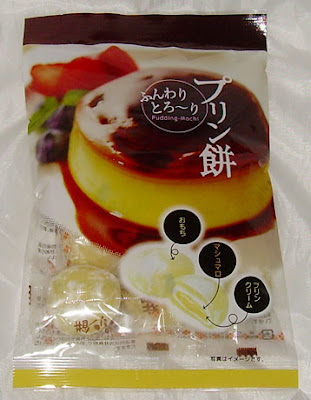 Mochi, or pounded rice cake, is a fairly common component in many traditional-style Japanese treats. It doesn't tend to show up that often in the more "glamorous" snacks that are familiar to English-language speakers. Nestlé Japan has made KitKats with "mochi puffs" (that taste like mothballs), but has never made a real "mochi" KitKat. When mochi gets used in chocolates, such as Tirol's mochi sweets, it tends to really just be a bit of a gummy blob and not actual mochi. I believe this is because the texture is delicate and it can go hard, tough, or moldy easily.

Real mochi has a very fine textural element that you can't easily incorporate into things like mass produce chocolates. It's soft, slightly chewy, and delicate when used as a shell to wrap some other filling. It's a bit like a fine dough. You can see why many Japanese people prefer wagashi, traditional sweets made with a variety of indigenous ingredients including mochi, over other types of sweets because the ingredients are used in a way which maximizes their appeal rather than bastardizes them for mass production.

Since I can buy wagashi at many places in Tokyo, I have less of an impetus to buy mass-produced mochi sweets. Frankly, the same applies to Japanese people so the market shelves are not overflowing with a wide variety of them. I've only reviewed two sweets (Yukimi daifuku, yuzu mochi) which used traditional-style mochi. I found this latest entry at Seiyu supermarket for 198 yen ($2.24). There are 10 pieces in the bag and each is about 44 calories for a blob which is about 3.5 cm (1.4 in.) in diameter (that's an average since they're not circular).

These are made by a company called Kubota, which is yet another one of those small snack food makers which squeezes an occasional product onto market shelves and of which I have never heard. Annoyingly, they don't have a web site. I'm guessing their target customer is at an age at which this new-fangled "computer" stuff might seem to only be accomplished with the aid of ghosts or demons in the metal box. 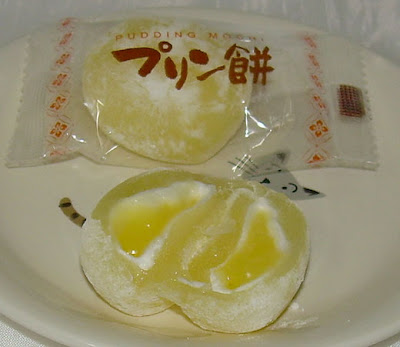 The ingredients for these include barley sugar, sugar, mochi powder, gelatin, eggs, and carotene (for coloring, no doubt). The fact that the list starts with two kinds of sugar should clue you in that these are pretty sweet. When you open a packet, you don't smell anything as mochi is really just rice so it has little smell. After you cut it open, you can smell the rich, eggy pudding inside. If you've had flan or custard, you know what it smells like. I expected this to mainly be a nice textural experience. This is not only because of the soft, chewy mochi, but also the marshmallow lining around the little soft pools of custard pudding.

It was, indeed, a very nice mixture of textures, but it also tasted very good. The pudding itself was more flavorful than expected and the sweetness made up for the bland mochi. You can also actually taste the soft marshmallow. In fact, this is impressive because every component can be detected on the tongue. Everything was soft and seemed very fresh. My feeling about these after sampling one was that these would make a great souvenir for folks back home because the flavor is familiar and palatable to all but the pickiest types, and they remain uniquely Japanese because of the mochi.

The only caveat I can offer to someone before buying this is that they are rather sweet and won't suit those who are sensitive to such things. That being said, these are truly lovely to have as a little treat with a cup of tea. The fact that they are packaged in such a way as to remain fresh over a longer period of time allows you to have a wagashi-like experience without worries about them going hard or stale rapidly. You can keep a bag around for awhile and sample at will. Note that I bought these on July 12 and they're good until September 28, 2010.

Pudding Mochi is one of my favorite types! I make my own mochi treats, but I still like to buy the pre-made kind just in case the mood strikes me.

These sound really good. I love mochi! It is definitely one of the few foods I'll miss when I return to the states.

They sound very good! I think my husband especially would enjoy them, since he loves purin.

My question is, where can I get this in the US??? My mom just brought one back from Japan it was incredible.

My question is, where can I get this in the US? My mom brought one back from Japan for me and it was incredible!

Bwhitney: I'm really glad that you enjoyed this so much! I wish I knew where to get it in the U.S. I think you might want to contact some of the small importers who live in Japan and see if they fulfill requests.

Good luck, and thanks for reading!