In our early years in Japan, my husband and I sampled a few bits of candy from local supermarkets, and I swear this tiny rice chocolate bar was one of those things we tried. It's about 8 cm (3.1 in.) long and 2.5 cm wide (.98 in.), and clearly marketed for kids. These sorts of candies are usually found in the sections of supermarkets with cheap candy in small packaging. This one sells for about 30 yen (33 cents).

As is so often the case with small companies, I spent an inordinate amount of time doing research and came up with little in the way of results. The maker, Tochoco, has no web site. However, I did find a 2007 "Confectionery Directory" which included a little information on the company such as the fact that they are located in Kanagawa prefecture and only have 70 employees. It's rather remarkable that they seem to have quite a lot of on-line outlets selling their candy (and this one in particular) given their small size. Besides this rice chocolate bar, they sell chocolate-covered corn snacks and a sort of puffed "cocoa ring" which resembles a chocolate Cheeto shaped like a flower without a center. 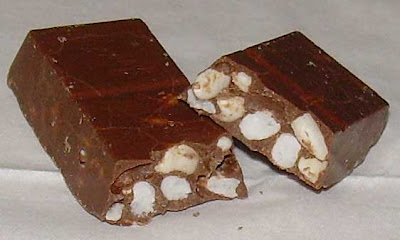 I think early sampling of this type of chocolate is why my husband and I sought out imported candy early on in our stay. While there are many very fine types of high quality consumer candy in Japan, there are also some pretty lackluster offerings. This bar represents some pretty low quality chocolate. The chocolate is gritty, grainy and super, super sweet. The flavor is bittersweet even though these are marketed as "mild chocolate". The rice puffs add some texture, but they are not crispy rice puffs. They're like puffed rice cereal that is relatively soft. The calorie count for this wisp of a bar, is given per 100 grams at 560 calories and the weight of the individual bar is not given. I'd guess this is about 50 calories though.

Everything about this bar screams "cheap". It's not just the price, the package design, and the poor quality chocolate (which does list cocoa butter as an ingredient, but you really can't detect it). There's also the fact that the bar itself looks very slap-dash in its presentation. This is rather unusual in Japan. The picture of the bar above may look like it has been damaged, but there were no fragments in the package so this is the way it came off the assembly line.

This was an interesting curiosity, and I did eat it all, but I wouldn't buy it again. If anything, this bar is worth sampling for some perspective about Japanese sweets. Based on my reviews and experiences with big brand bars, one might conclude that the consumer snack market is a paradise of high quality treats. That really isn't so. If you buy the "right" (or "wrong") products, you'll find that there is substandard fare out there as well.